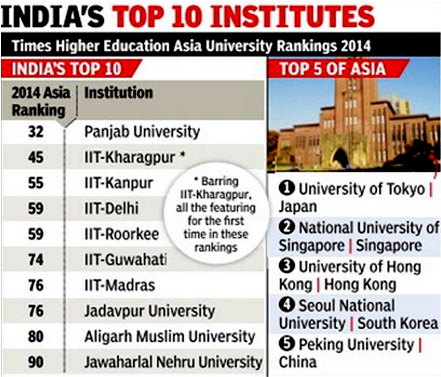 For the very first time, Punjab University has broken all the record by enlisting into the top 400 club in the Times Higher Education (THE) World University Rankings for the year 2014, well ahead of the four IITs. The university has been crowned as IndiaÃ¢â‚¬â„¢s top varsity and is placed at 32nd position among Top 100 Asian universities.

Around 21 universities in India took part in the (THE) ranking. None of the universities from Indonesia, the Philippines or Pakistan figure in the ranking.

Thanks for rating this! Now tell the world how you feel - Share this on Twitter and on Facebook.
(Nah, it's cool; just take me back.)
MOODTHINGY
How does this post make you feel?
« CBSE students ace JEE Advanced result 2014 to get into IITs
Applications Invited For NRI Students From CAPE Engineering, Kerala »