Physical challenges could not stop Naresh from going to IIT! 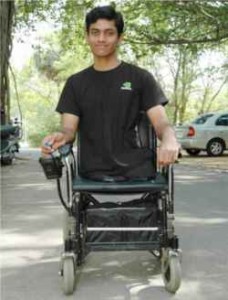 New Delhi: Naga Naresh Karutura is a living proof that what Roger Crawford said was true Ã¢â‚¬â€œ Ã¢â‚¬ËœBeing challenged in life is inevitable, being defeated is optionalÃ¢â‚¬â„¢. Ã‚Â Physically disabled Naresh has no legs. His parents are illiterate. He came from a low-income family background. And yet, today, he has graduated from IIT Madras as a Computer Science Engineer and joined Google at Bengaluru.

Naresh had topped the state exams. His Maths teacher Pramod Lal recommended him to Gowtham Junior College for IIT JEE preparation. Seeing his bright academic record, the college waived its annual fee of Rs 50,000 for Naresh. Though his overall IIT JEE rank was not one to boast of (at #1992), he ranked fourth in the Physical Handicapped (PH) category and was able to join Computer Science at IIT Madras.

The study experience at IIT Madras was excellent for Naresh who loved to interact with such a brilliant peer group. Moving about in a powered wheelchair, 21-year-old Naresh is optimistic, cheerful and full of spirit.

He passed over an offer from Morgan Stanley to join Google R&D because he wanted to be in pure computer science field where he could work with algorithms and game theory.

Naresh also thinks himself Ã¢â‚¬ËœluckyÃ¢â‚¬â„¢ and believes Ã¢â‚¬ËœgoodnessÃ¢â‚¬â„¢ is abound in the mankind. He got his Jaipur foot in the third standard but he had to stop using it after two years as it was difficult to tie them without the stems for legs. Also, they were very slow. But the hospital that fixed the Jaipur foot also work for rehabilitation of physically handicapped it serves. It was the hospital that paid the fees of IIT for Naresh. Likewise, a total stranger Ã¢â‚¬â€œ Sundar Ã¢â‚¬â€œ whom Naresh had met in a train after his second year at IIT, paid his hostel fees for the next two years.

The god-send timely help, determination, talent and hard work became a recipe of success for Naga Naresh Karutura who overcame physical and financial challenges to achieve his dream goal.

Thanks for rating this! Now tell the world how you feel - Share this on Twitter and on Facebook.
(Nah, it's cool; just take me back.)
MOODTHINGY
How does this post make you feel?
« Foundation Programme a Ã¢â‚¬ËœhitÃ¢â‚¬â„¢ at IIT Gandhinagar
Now an app by engineering students to find blood donors quickly! »