The Inglorious Humiliations in the Life of an IITian 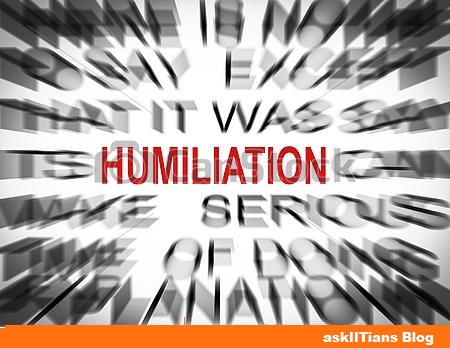 Being an IITian has its own share of inglorious humiliations. And no ordinary man can walk past it with a jerk-like-smile on the face, tolerating it all, without a word better than an IITian. May be, this is also the reason why IITians are called the cream of the crop in IndiaÃ¢â‚¬â€for their unprecedented ability to just take in all the humiliation that comes their way with their IITian tag.

The life of IITians is really tough, courtesy the number of embarrassing one-way questions hurled at them by people surrounding them for just anything weird. There was a guy from IIT-Bombay who had to fix his uncleÃ¢â‚¬â„¢s toilet flush to prove him that he was actually a genius. Interestingly to his uncle, his fat package job in the United States wasnÃ¢â‚¬â„¢t enough. Many poor IITians like him are made to go through daily funny travails in their lives by some blood-sucking zombies around them, especially women in all forms.

Most IITians feel that the most frustrating thing about being an IITian is to be bombarded with unexpected stupid questions. For example, people bump on IITians and query about the streams that their kids should opt for in a particular institution.

All right! IITians are intelligent. They have proved it. But how on earth it makes them really good at judging colleges and their damn streams? Obviously, itÃ¢â‚¬â„¢s frustrating.

There are other people who doubt your potential always despite the fact that you are the damn person who has cracked IIT-JEE. They come and ask you the price of the donation seat that they will have to shell out to get a seat in IITs. How the hell would you know about it! Do they mean youÃ¢â‚¬â„¢ve bribed for a seat in IIT? Humiliating!
But you canÃ¢â‚¬â„¢t really waste your time over these things. These things happen. They are a part of your IIT life. You got to learn to live with them sooner or later.

The hell breaks loose when not even a single girl in the country takes you seriously as man. For them, you are either a nerd or a special geeky gadget to solve their academic problems, if they ever get a chance to study. They frustrate you so much so that you finally end up doubting whether you are a human or not. They treat you like an alarm-clockÃ¢â‚¬â€make you speak when necessary and keep you shut when not.

Just because you have cracked IIT-JEE doesnÃ¢â‚¬â„¢t mean you will earn a pay package in million dollars. Relatives come over and keep figuring out the pay package you might get at the end of the graduation.

But being an IITians is worth all that comes in our life. We have made the country proud and the world is always taking a notice of us anytime.

Thanks for rating this! Now tell the world how you feel - Share this on Twitter and on Facebook.
(Nah, it's cool; just take me back.)
MOODTHINGY
How does this post make you feel?
« Rise in BITS Pilani Placements, Higher Demand for BITS Admissions
Top 7 Tips to Crack the IIT-JEE Examination »