Two IIT-Delhi Students behind the Incredible Success of allMemoirs 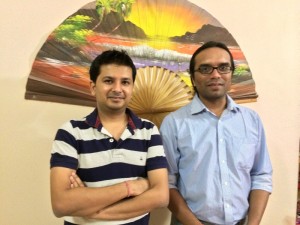 IIT-Delhi students, Mrigank Shekhar and Kush Srivastava, are riding high on their success and enjoying every attention coming their ways. With their product, allMemoirs, a mobile application, already crossing its product validation stage in less than a year, they believe that they have successfully served their purpose of discovering fashion hassle free, personalized, and fun.

Ã¢â‚¬Å“We want to bring the 3Fs of shopping under allMemoirs: Fashion, Fun and Friends,Ã¢â‚¬Â said the two excited IITians during an interview.

Ã¢â‚¬Å“We now believe that the product we are building has value for the end user,Ã¢â‚¬Â Mrigank, CEO of allMemoirs, was quoted as saying.

Friends since their college days at IIT-Delhi, Kush and Mrigank also started their professional career together at Qwest. Qwest is now known as Century Link.

Ã¢â‚¬Å“Qwest was an interesting mix of startup and corporate atmospheres. While the company was a huge telecom player in the USA, it was a brand new setup in India. We sort of enjoyed the best of both worlds at Qwest,Ã¢â‚¬Â Mrigank recalled. He later moved to the United States of America.

Meanwhile, Kush joined mCheck, which was then a startup in the mobile payments space.

Ã¢â‚¬Å“Both of us spent almost six years in the two extreme ends of the spectrum. What I quickly realized is that if you are working on an idea along with another job, the idea becomes just a hobby because it never gets enough attention or priority,Ã¢â‚¬Â Mrigank said.

Both were constantly exploring the idea of their own startup before finally taking a plunge into the social commerce space. Olmec Technologies Private Limited was launched by them in Banglore in January, 2013. Its first allMemoris was launched in May, 2013.

Talking about their product, allMemoirs, they say, Ã¢â‚¬Å“ItÃ¢â‚¬â„¢s a product classification, tagging, and recommendation platform offering personalized experience. Ã¢â‚¬Å“We handpick products from multiple ecommerce sites and the consumers see them personalized to their likes and tastes. For online merchants, allMemoirs provide a marketing platform to reach targeted shoppers with their new product launches, popular products and seasonal promotions.Ã¢â‚¬Â

allMemoirs has been released with two mobile apps in the market: Android & iOS for shopping and fashion, and Android & iOS Apps for gifts. Its third app is slated for release during second quarter of this year.

Like all other such companies in the same domain, they are also focusing more on offering an excellent user experience. This is why theyÃ¢â‚¬â„¢ve optimized bandwidth for the users of their mobile application.

The two believe that the market of social commerce in India will be a $250 million market by 2015.

Ã¢â‚¬Å“Invoking a Ã¢â‚¬Ëœlove at first sightÃ¢â‚¬â„¢ feeling in visiting users is difficult. But we feel that our product capabilities will counter this and our personalized classification engine will retain them for long. Our marketing strategies bring new customers anyway,Ã¢â‚¬Â Mrigank said.
This post was contributed by Monika Rai,Askiitians expert

Thanks for rating this! Now tell the world how you feel - Share this on Twitter and on Facebook.
(Nah, it's cool; just take me back.)
MOODTHINGY
How does this post make you feel?
« The UndisputedÃ¢â‚¬â€To Find the Real Truth behind IITs and BITS Disputed Dominance
IIT-Madras Set to Achieve Biggest Milestone in History with Its Project to End Power Outages in India »