PM and President push NITs to increase their research output 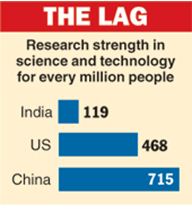 New Delhi: Despite the fact that India has the second largest population in the world, its research output is quite low. For every million people in the country, the number of researches in science and technology in the US is 715; in China, it is 468. India is far behind with only 119 researchers for everyÃ‚Â million people it has. As a result, global rankings of Indian institutions also get affected.

In the QS World University Rankings 2013, IIT Delhi was ranked #222 while the Panjab University was ranked at #226 in the Times Higher Education (THE) rankings. None of the NITs managed to break the glass ceiling and making it to the world-renowned rankings.

This was the issue that irked the President Pranab Mukherjee and the Prime Minister Manmohan Singh and they brought it up at a conference of the NIT Directors recently. They said that the IITs and NITs have to emphasize on research and innovation. In the NITs, there are only 71,000 students but only 4,000 are PhD students. In the IITs, there are only 60,000 students but only 3,000 are PhD students.PM pointed out that China contributed 21 per cent science and technology research to the scientific publications worldwide as early as 2007. Three years later, IndiaÃ¢â‚¬â„¢s contribution of research output was only 3.5 per cent. Ã‚Â Also, in 2010, India only filed 0.3 per cent of patents at global level.

India also lags much behind in R&D investment. While America invested 32.4 per cent in research and development, China invested 9.2 per cent. India invested only 2.2 per cent in this field.Hence, NITs and IITs need to correct its course towards research work and encourage more scientific innovations.

Thanks for rating this! Now tell the world how you feel - Share this on Twitter and on Facebook.
(Nah, it's cool; just take me back.)
MOODTHINGY
How does this post make you feel?
« Super 30 aggrieved by fee rise for offline JEE Main 2014 exam
IIT-Kanpur felicitates its alumni »