Ragging in India: An Overview 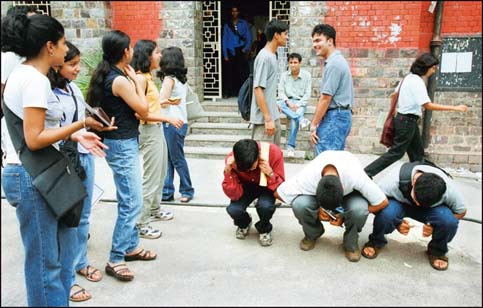 College life is one of the most important stage of life for any student, as they not only learn but they also start grooming in the real form. Many students enjoy their college life, but as per several surveys done most of the students find their first year of the college a tough one, as they go through various forms of ragging in their college.

Sneha Jain, a student of Metallurgical Engineering, IIT-Bombay, says: Ã¢â‚¬Å“Mild ragging is fun and a learning process as you learn to laugh at yourself. It helps you to gel up with people you met recently. They are your seniors but to have that bond you need that particular moment to break the ice, and ragging is just a way to do that! I am not completely against ragging but yes, it should be in a healthy manner.Ã¢â‚¬Â Similarly views are of NikhilVerma, a student of Computer Science atNIT Jamshedpur,Ã¢â‚¬Å“One should always promote the sort of ragging which helps students overcome the fear and loosen-up with their seniors. It is more fun being ragged than ragging someone according to me and I had a lot of fun when my seniors ragged me!Ã¢â‚¬Â On a complete contrast to the statements above, an engineer working in a private sector company, completed his Engineering from DCE who choose not to disclose his name said, Ã¢â‚¬Å“What exactly do you think about when a student is beaten up mercilessly in the name of ragging?? I was stripped and tortured sexually by my seniors. Ragging is a sin and has to be treated as a crime!Ã¢â‚¬Â Another MBBS student, ManojAgrawal said, Ã¢â‚¬Å“The bullies must be taught a lesson such that no other shall even think of doing that ever in future. A shy person coming from a conservative family shall get hurt deeply by such acts used in ragging and this needs a check. Even I was very much uncomfortable as I belong to a family which is not that modern and we still follow the traditions strictly, it was a shock for me!Ã¢â‚¬Â

As per several definitions being derived by experts, ragging means causing,compelling,inducingor forcing a student by verbal means or by doing any act, which isolates the person and exposing him to ridiculeby injuring him or confining him or by using criminal force. Commonly there are two forms of ragging, verbal and physical. It is found that the effect of verbal ragging is lesser than the physical ragging, but is also depends on person to person and the methods of ragging being implemented on the student. The supreme court of India defines ragging as Ã¢â‚¬Å“Ragging is any disorderly conduct, either spoken, written or by any act which has its impact of teasing, involving inundisciplined activities, or treating withrudeness that causes or most likely to cause hardship or annoyance or harm and raise the sense of fear in a new joiner, fresher or junior students.Ã¢â‚¬Â

It is believed that the roots of ragging arelegacy of the British, who endorsed these practices to our country from the elite public schools. But in several researched it is found that extreme formsRagging have now seem to have disappeared from the Britain, but are still being continued in the Asian countries especially, Sri Lanka, India, China, Pakistan etc.

RAGGING IN INDIA: STEPS BY THE GOVERNMENTÃ‚Â

In the year 2009, a high-level committee was established to probe the death of AmanKachroo a medical student revealed that the reason of his death was heavy consumption of alcohol that lead to serious ragging and violence in the college campus. In the year 2007, 7 deaths were reported due to ragging and numerous other cases were being registered due to ragging. Ragging in India includes serious abuses and violation of the human rights. In many colleges across the country ragging has been strictly banned and is proving to be very effective, but still some cases are being brought to notice by the media. The honorable Supreme Court has also taken strong steps against ragging and the cases of ragging have been declared a criminal offence. Society Against Violence in Education also known as SAVE,the Anti-Ragging NGO has widely worked to stop the ragging in various engineering and medical colleges and especially in the hostels across the country. With the order of Supreme Court of India, a National Anti-Ragging Helpline was created that helps victims and take action in cases of ragging by providing the information to the Head of the particular institution along with the local police and authorities. The most important feature of the helpline is that the complaint can be registered without disclosing the names by the victims through email at helpline@antiragging.in and on calls at 1800-180-5522.

Thanks for rating this! Now tell the world how you feel - Share this on Twitter and on Facebook.
(Nah, it's cool; just take me back.)
MOODTHINGY
How does this post make you feel?
« JEE Online and JEE Offline: A Complete Overview
HRD ministry and Smriti Irani at it, again!! »