Topic like this will let you score more in AIPMT

This time I am back with one of interesting and much more scoring topic in AIPMT and various medical entrance examination. Ecology and environment is one of the burning topic from where a lot of questions are being asked every year. Keeping in view the requirement of you guys, I came up with the collective information from the unit of ecology.

The ecological pyramids are simply the representation of the trophic structure and also trophic function of the ecosystem. As we will move forward, we will realize that the producer form the base and the successive trophic successive tropic level at the apex.

In pyramids, basal, mid and top tiers show the parameter values for producers, herbivores and carnivores

There are three ways by which an ecological pyramid can be represented:

These pyramids are mostly upright number of producers is maximum and number of herbivores and carnivores decrease towards apex or at successive trophic levels, such as grassland ecosystem and aquatic ecosystem. 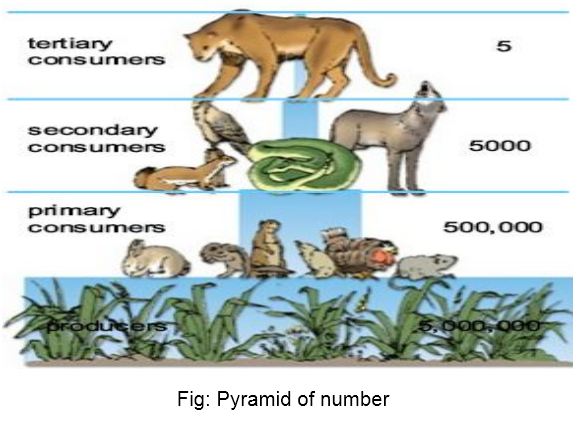 The Pyramid of Biomass is a graphical representation that shows the extent of biomass per unit area within different trophic levels in an ecological system. The bottom level of the representation is usually occupied by the producers whereas the carnivals are shown in the top levels.

In Pyramid of biomass, the energy capacity is usually concentrated at the base. This represents at being wide and decreases as one moves up to the apex.

Mostly these pyramids are also upright (erect). For e.g., Tree ecosystem and forest ecosystem. When we observe pyramids of biomass in aquatic ecosystem is inverted because in it producers are micro-organisms and their biomass is very less.

If we talk about grassland, the biomass of the grasses is maximum, and it gradually decreases towards the consumer level. Such inverted biomass pyramids occur because the producersÃ¢â‚¬â€phytoplanktonÃ¢â‚¬â€grow, reproduce, and are consumed so quickly by the zooplankton that they never develop a large population size, or standing crop.

The energy pyramid is a graphical model which depict the flow of energy in a community. Different groups of organisms represent that they might compose a food chain at different levels.

When you will observe it from bottom towards upward, they will be as follows: 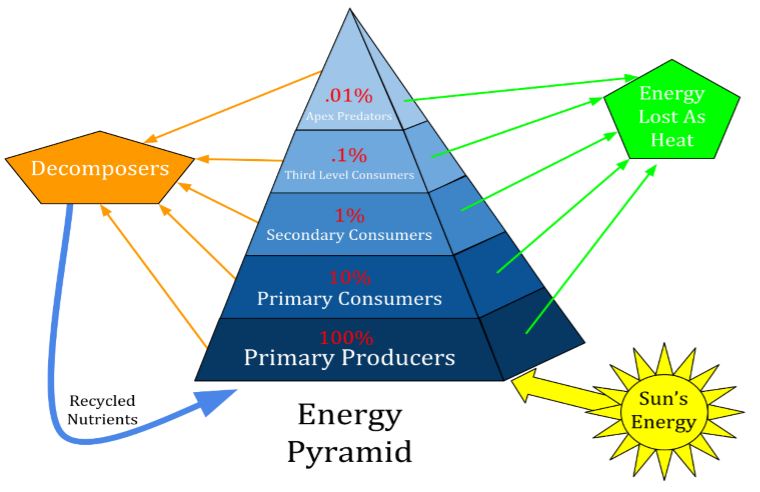 Now you will ask, who come this pyramid shape?

Guys, if you remember the conversion of fuel (carbohydrate) into energy (ATP) !

Absolutely right! Some of the energy to fuel various life processes at each level. So, there is gradual decrease in energy at successive trophic levels.

From above references, we came to know that the consumers at the top of a food pyramid, as a group, thus have much less energy available to support them than those closer to the bottom. ThatÃ¢â‚¬â„¢s why their numbers are relatively few in most communities. Eventually, the amount of useful energy left canÃ¢â‚¬â„¢t support another level. ThatÃ¢â‚¬â„¢s why energy flow is depicted in the shape of a pyramid. The energy that enters a community is ultimately lost to the living world as heat.

So guys, I am sure you got the basic understanding of what ecological pyramids are and how they are linked with various ecosystems.

Well! I am Aabid Hussain, faculty member and your biology mentor from askIITians. Our priority is the quality education and we are always committed to that.

If you want to learn more about various topics related to biology, just click here.

Feedback after every topic are needed to cover more path towards quality. So, we suggest you to give your valuable feedback and ask you queries here.

See you guys next time with something value worthy and things to know. Till then, take care.

Thanks for rating this! Now tell the world how you feel - Share this on Twitter and on Facebook.
(Nah, it's cool; just take me back.)
MOODTHINGY
How does this post make you feel?
« The mystery of life in codes
Sample Video Lectures for IIT JEE Main + Advanced | AIPMT | AIIMS | Class 11 & 12 »