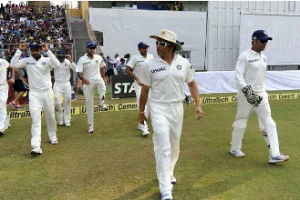 The topic of the conversation was whether the battling legend will be able to score a century in his 200th test match. That did not happen. Sachin Tendulkar fell short of the century with only 74 runs in his kitty.
At the Wankhede stadium, it was a full house too. The tickets of the match were booked much in advance and were difficult to get at the last minute. However, as the God of Cricket bid farewell, many abandoned their seats and left the stadium.
There was a dip in attendance in students where schools were open and there were students who got lucky as it was Moharram holiday in their schools. At many places, the government holiday of Moharram was shifted from Thursday to Friday, according to the sighting of the moon. Such students were lucky to get a chance to watch the entire match without any guilt.
Even the students who attended schools did not remain untouched by Sachin mania. They kept checking scores in library and computer labs and kept circulating the scores throughout the school.

This post was written by Aditya Singhal, managing director of askIITians

Thanks for rating this! Now tell the world how you feel - Share this on Twitter and on Facebook.
(Nah, it's cool; just take me back.)
MOODTHINGY
How does this post make you feel?
« Sachin Ã¢â‚¬â€œ Our Ideal Role Model
The Back BencherÃ¢â‚¬â„¢s Tip to learn the Periodic Table »