Mendel and the Gene Idea 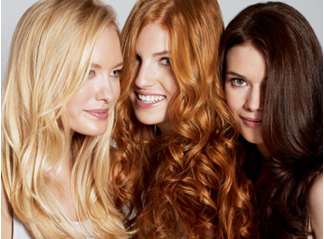 The Deck of Genes

If you saw a woman with bright purple hair walking down the street, you would probably infer that she had not inherited her striking hair color from either of the parent. Consciously or not, you have transformed the observation of hair color into a list of possible variations that occur naturally among people. Brown, blue, gray or green eyes; black, brown, red or blond hair- these are just a few examples of heritable variations that can be observed among individuals of a population.

Ã‚Â What are the genetic principles that account for the transmission of such traits from parents to offspring in humans and other organisms?

The explanation of heredity in 1800s was the Ã¢â‚¬ËœblendingÃ¢â‚¬â„¢ hypothesis. This hypothesis states that the genetic material contributed by the two parentsÃ¢â‚¬â„¢ mixes in a manner similar to the way blue and yellow paints blends to make green. This hypothesis predicts that a freely mating population gives rise to a unique combination of individuals.

An alternative to blending model is Ã¢â‚¬Å“particulateÃ¢â‚¬Â hypothesis of inheritance: the gene idea. The Ã¢â‚¬Å“particulateÃ¢â‚¬Â here refers to the genes. So according to this model, parents pass on these genes that retain their separate identities in the offspring. The collection of gene in an organism is more like a deck of cards. Like cards, genes can be shuffled and passed along, generation after generation. 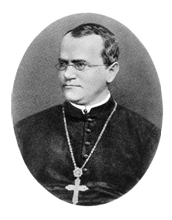 Why Mendel chose to work with peas?

Mendel tracked only those characters that occurred in two alternative forms. For example, his plants had either purple flowers or white flowers, there were no colors intermediate between these two varieties. If he had focused on characters that varies continuously among individuals, seed weight for example, he would not have discovered the genetic nature of inheritance.

Mendel developed a model to explain the 3:1 ratio inheritance pattern that he consistently observed among the F2 offspring in his pea experiments. Four related concepts making up this model are: 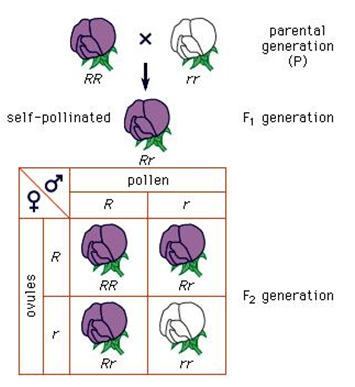 Does MendelÃ¢â‚¬â„¢s segregation model account for the 3:1 ratio he observed in the F2 generation of his numerous crosses? 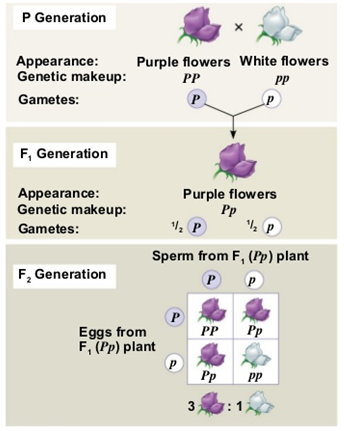 This figure illustrates the combinations using a Punnett square,a diagrammatic device for predicting the allele composition of offspring from a cross between individuals which are genetically similar. We use a capital letter to symbolize a dominant allele and a lowercase letter for a recessive allele.

In the F2 offspring, what color will the flowers be?

allele and one white flower allele; these plants will also have the purple flowers, the dominant trait. Finally, one-fourth of the F2 plants have inherited two white flower alleles and will express the recessive trait. Thus, MendelÃ¢â‚¬â„¢s model account for the 3:1 ratio of trait that he observed in the F2 generation.

The Law of Independent Assortment

Mendel derived the law of segregation in which he followed a single character that is flower color.All the F1 progeny produced in his crosses of true-breeding
parents were monohybrids,meaning that they were heterozygous for the one particular character being followed in the cross. We refer to a cross between such heterozygotes as a monohybrid cross.

Imagine crossing two true-breeding pea varieties that differ in both of these charactersÃ¢â‚¬â€a cross between a plant with yellow round seeds (YYRR) and a plant with green-wrinkled seeds (yyrr). The F1 plants will be dihybrids, individuals heterozygous for the two characters being followed in the cross (YyRr).

But are these two characters transmitted from parents to offspring as a package? That is, will the Y and R alleles always stay together, generation after generation? Or are seed color and seed shape inherited independently?

The F1 plants, of genotype YyRr, exhibit both dominant phenotypes, yellow seeds with round shapes, no matter which hypothesis is correct. The key step in the experiment is to see what happens when F1 plants self-pollinate and produce F2 offspring. If the hybrids must transmit their alleles in the same combinations in which the alleles were inherited from the P generation, then the F1 hybrids will produce only two classes of gametes: YR and yr. This Ã¢â‚¬Å“dependent assortmentÃ¢â‚¬Â hypothesis predicts that the phenotypic ratio of the F2 generation will be 3:1, just as in a monohybrid cross.

The alternative hypothesis is that the two pairs of alleles segregate independently of each other. In other words, genes are packaged into gametes in all possible allelic combinations, as long as each gamete has one allele for each gene. In our example, an F1 plant will produce four classes of gametes in equal quantities: YR, Yr, yR, and yr. If sperm of the four classes fertilize eggs of the four classes, there will be 16 (4X4) equally probable ways in which the alleles can combine in the F2 generation, a right side. These combinations result in four phenotypic categories with a ratio of 9:3:3:1 (nine yellow-round to three green-round to three yellow-wrinkled to one green wrinkled). When Mendel did the experiment and classified the F2 offspring, his results were close to the predicted 9:3:3:1 phenotypic ratio, supporting the hypothesis that the alleles for one geneÃ¢â‚¬â€ controlling seed color or seed shape, in this exampleÃ¢â‚¬â€are sorted into gametes independently of the alleles of other genes.

Mendel tested his seven pea characters in various dihybrid combinations and always observed a 9:3:3:1 phenotypic ratio in the F2 generation. The results of MendelÃ¢â‚¬â„¢s dihybrid experiments are the basis for what we now call the law of independent assortment, which states that each pair of alleles segregates independently of each other pair of alleles during gamete formation.

Mendel tested his seven pea characters in various dihybrid combinations and always observed a 9:3:3:1 phenotypic ratio in the F2 generation. The results of MendelÃ¢â‚¬â„¢s dihybrid experiments are the basis for what we now call the law of independent assortment, which states that each pair of alleles segregates independently of each other pair of alleles during gamete formation.

Thanks for rating this! Now tell the world how you feel - Share this on Twitter and on Facebook.
(Nah, it's cool; just take me back.)
MOODTHINGY
How does this post make you feel?
« Vegetable Vendor helps JEE aspirants to increase Memory Power
DonÃ¢â‚¬â„¢t Study for JEE, Prepare for It! »