If electrons, neutrons and protons are 3 brothers, how will their daily life will beÃ¢â‚¬Â¦ 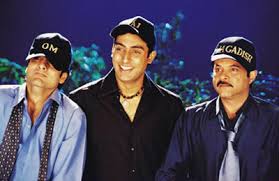 SeeeeeeeÃ¢â‚¬Â¦Now I am not gonna describe any story related to this movie or something..Rather, I will be asking you to recall another Bollywood movie, Ã¢â‚¬Å“Om Jai JagdishÃ¢â‚¬Â.

Let me give you a pic for the same.

You all might be thinking why am I discussing about movies in this article. Since this article is there on askIITians website, so this must be supposed to have some scientific concepts. OkkkkkkkkkÃ¢â‚¬Â¦So without any other further bollywood stuff, let me now tell you a basic concept of atomic structure.

If I am not wrong, I think you all must be aware about Ã‚Â the composition of an atom. According to the definition, one can say that an atom is the smallest unit of matter.Ã‚Â  It is made up of three sub-atomic particles:Ã‚Â These sub atomic particles are the proton, the electronÃ‚Â  and the neutron.

Hey readers, what my basic concern is to tell you the composition of an atom, how protons, neutrons and electrons are assembled in an atom. And how with all these sub atomic particles, the atom as a whole can be regarded as a stable unit.

To tell you the details about all these concepts, I will now be telling you a story.

Sooooooooo, lets take a deep breath and start up with a story.

Once upon a time, far away in a village there was a boy named Vikas. That boy was from a very poor Brahmin family. But he wanted to study. Some far relative of that boy sent him for studies in the nearby town. The boy started living in a flat where he met two other boys of same age. These two other boys were very different from each other in terms of their attitude, their choices and their priorities. But both of them, Samarth and Shubham, were from a very rich family. Always they used to spend money on outings and in restaurants. But Vikas (the poor boy) used to be left alone. Whenever some money related issue was there, Samarth and Shubham used to handle it nicely, but again the poor Vikas was always with a sad face.

But one very good thing about Vikas wasÃ¢â‚¬Â¦He was a very intelligent and a mature guy. He used to handle every situation very technically. Shubham and Samarth were little naughty, wicked and unmanageable. So every time when Shubam and Samarth were in trouble, Vikas used to help them out and manage everything by his wise nature.

These roommates always used to fight with each other, throwing tantrums on each other. But at the end of the day, they used to be together, again sitting at their respective seats and enjoying the dinner. This thing continued for nearly a couple of years and theseÃ‚Â  students were about to complete their studies. On a very fine day, their college farewell was organized. That day also, they fought like anything. Next day when all of them had to leave the hostel and move to their respective hometowns, none of them could stand alone. They were having tears in their eyes, emotionally struck to a difficult situation and all three were in a pool of sadness.

SooooooooooooooÃ¢â‚¬Â¦Now you all might be imagining the situation three friends were in when they were separated from each other..

The neutrons (Vikas) are neutral and are very mature. Their presence is necessary so as to make the entire atom stable as a whole. Now since Shubham and Samarth, both of them were very naughty, we just can not afford them to stay together. Keeping this in mind, in an atom also the protons are deep inside the nucleus and the electrons are revolving around the nucleus in certain orbits. Since the neutrons are heavier particles, so we say the mass of an atom is generally taken to be approximately the mass of nucleus itself. (Take mass as the wisdom of these three particles). See this is how we correlated the three roommates who used live like brothers with the sub atomic particles.

Now I hope readers you all are much clear about the composition of atom and how these different particles are arranged in the atom.

This was about the arrangement of sub atomic particles in an atom. So now I ll try to meet you again in my next article with a new science concept..

By that time, take care and be happy with your siblings, your roommates and your friends..

Thanks for rating this! Now tell the world how you feel - Share this on Twitter and on Facebook.
(Nah, it's cool; just take me back.)
MOODTHINGY
How does this post make you feel?
« Different types of carbohydrate and their real life example..
These daily usage of s-block elements will surprise youÃ¢â‚¬Â¦ »