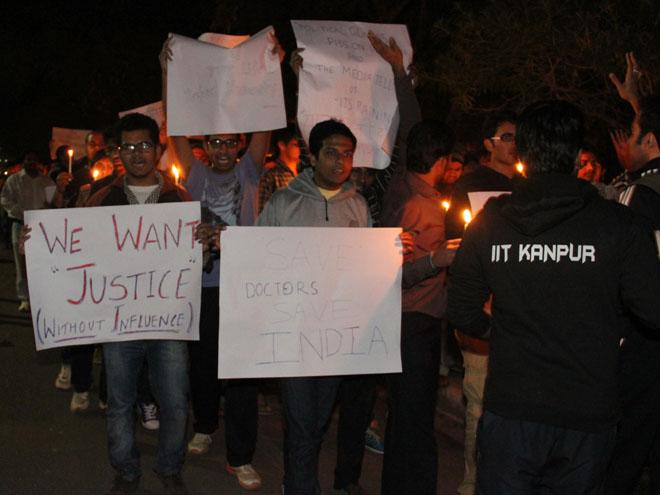 Participation of the IIT-Kanpur students in the protest between Samajwadi Party MLA Irfan Solanki and Kanpur doctors has worked like oil in fire. With their participation in the ongoing fracas, the protest has gained momentum spreading it like a wildfire across the nation in just a few daysÃ¢â‚¬â„¢ time.

Taking on the streets of Kanpur city, Kanpur doctors are deeply wounded with the misuse of police power by politicians for their own objectives. IIT-Kanpur students were moved by the protest and decided to play an important role in it by protesting against the governing body of the state in the college premises.

Refuting the protest against him, Irfan Solanki, Samajwadi Party MLA, claimed to have suffered serious injuries during clash with junior doctors of Lala Lajpat Rai Hospital. On the other hand, doctors deny the accusations made by the party MLA. Doctors didnÃ¢â‚¬â„¢t attack him even once.

He allegedly used his influence to order police to arrest and assault doctors brutally. They were 24 doctors.

According to the reports, the police entered the hostel premises and started assaulting without even telling them the reason. Entering college premises after 8 pm is against the law.

“It was a poignant and intolerable scene in the hostel when police was beating the students,” said one of the students from IIT-Kanpur.

“We have voted them to power and when we are in trouble because of one of their workers, and then it’s their responsibility to come forward and take the necessary action. But they are looking completely unconcerned about this matter as they haven’t said a word in this regard so far,” he added further.

Thanks for rating this! Now tell the world how you feel - Share this on Twitter and on Facebook.
(Nah, it's cool; just take me back.)
MOODTHINGY
How does this post make you feel?
« IIT or Not, You can Still Achieve Success!
Reputation of Indian Universities Drop to a New LowÃ¢â‚¬â€DonÃ¢â‚¬â„¢t Find Mention in THEÃ¢â‚¬â„¢s Latest Rankings »