Cheated at IIT JEE to be an IITian; got a lucky break! 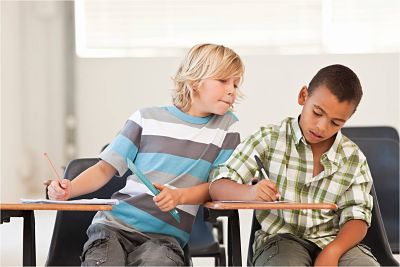 I will take the liberty of remaining anonymous as this is a story I am not very proud of. It is my real-life experience about how I cheated at IIT JEE and the black-market tactics I used to become an IITian.

Here is a disclaimer (if cheaters are ever allowed one):

I had not planned on cheating when I entered the examination center. I had no chits with me and had no intention of doing what I did in the exam.

That said, I had not prepared for IIT JEE too. I was guilty of not managing my time more judiciously, even though a lot was on the stake.

When I entered the exam centre, I was wondering what I will do there and tried to prepare my dad for the disaster report that might have negative scores in it. With an intention to get it over with, I entered the exam hall early. To while away time, I observed the position of seats closely.

There were eight students who would sit at different angles from me. As I saw them, my attention got stuck on one of them who seemed to be geeky and studious enough to be a typical IITian.

That changed my game plan.

When instructors started distributing the paper, I noticed that there were ten sets. The way papers were distributed had a zig-zag but fixed pattern. I could not help but notice that if I received the paper from the fourth set, my studious neighbor would have received a question paper from the sixth set.

First, like a good student, I tried to check how many questions I could actually answer correctly. There were very few such questions. My eyes drifted to the question paper of my neighbor Ã¢â‚¬â€œ at the question that seemed to have an exact shape and design as one of the questions in my QP. I also saw the answer that he had marked for the question. I copied his answers to as many questions as I could see in his booklet. It took me an hour to look at the questions while avoiding the prying eyes of four invigilators and a guest invigilator overlooking 40 candidates in a room.

I had been able to look at 4 out of 8 questions in Part 1 and 3 out of 4 in multiple-choice questions. Time was drifting away and I needed a quicker way to mark the right answers.

Hence, I used the data of the questions I already had to find the algorithm that had been used to jumble the questions in my paper and my neighborÃ¢â‚¬â„¢s paper. Now, I only had to look at the OMR sheet of my neighbour and could find where answer of a question in his paper should reflect in my paper.

To be sure, it was not an easy task to do. OMR sheets are colored purposely to confuse the human eye.

There were two papers in IIT JEE. Each had been divided into three sections Ã¢â‚¬â€œ Physics, Chemistry and Maths. Each subject had been further sub-divided into four parts. Algorithms for each part were different. Cracking them seemed like a game, a challenge to me. As I cracked the algorithm of the first part, it did not take me much time to untangle others.

In both the papers, I kept following this tactic. By the time I came of the hall, my eyes were strained from glancing sideways. I was so mentally exhausted and drained that I fainted.

But all my black-market tactics worked and actually won me a seat at one of the Top 6 IITs. My All India Rank was good too and within Top 3500. I am a 5-pointer at IITs and I can see the efforts 9-10 pointers put to keep up with the difficulty levels here.

Perhaps, what I did was not correct. May be I was not right to take this seat, as a student who had worked hard for two long years for his IIT dream might have been denied a seat because of me. But whatever I did occurred spontaneously. It was not pre-planned. It is just a matter of perspective.

Most of my friends think that I am a genius, who cracked IIT and excelled at other extra-curricular activities at national-levels too. Others hold an opinion that I am what I am because of my parents and all those who contributed in bringing me up. I do not over-think such things.

I am happy to be where I am. I hope to forge some great friendships and a great study experience during my four years at IIT.

To help us bring you breaking news and Informative Articles please subscribe to our blog!

This post was published by Alok Kumar Singh, askiitians

Thanks for rating this! Now tell the world how you feel - Share this on Twitter and on Facebook.
(Nah, it's cool; just take me back.)
MOODTHINGY
How does this post make you feel?
« Japan to offer Rs 1,129 crore for campus development at IIT Hyderabad
Ravinder Kaushik Ã¢â‚¬â€œ Black Tiger of India and a Major in Pakistan Army! »