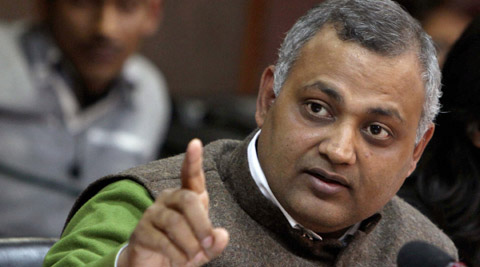 Not even a month in power, AAP is going through a rough patch in politics continuously, which, if to believe reports, have deteriorated its image and loosened its foothold in the government. Unfortunately, AAPÃ¢â‚¬â„¢s unbelievable performance followed by victory in the last elections proved a short-lived event.

Barely a month in power, winds have started blowing from a different direction for AAP. The party, which enjoyed a ride of immense appreciation and gratitude during its initial days in government after victory, is now receiving wrath from people of various groups in India.

People who know Somnath Bharti closely say that he is aggressive, combative, and fiercely ambitious. The law minister has a long history of going against laws to save laws.

“Unlearn to learn: The art of learning is in unlearning…In my experience, unless we learn the unlearning trick, it is at times impossible to be in the learning mode. In fact, little deeper you delve into this and you understand that unlearning is inherent into learning,” writes advocate Somnath Bharti on his blog.

He displays the same attitude and qualities in full swing in his every venture from a Mathematics tutor to an IT consultant to president of IIT-Delhi Alumni Association to a supoerme court lawyer.

His aggressiveness was on display during his instinct as the law minister of Delhi when he raided South DelhiÃ¢â‚¬â„¢s Khirki Extension and allegedly assaulted women from African community. Many believe that he has misused his powers as a law minister with this unlawful act. Obviously, being a DelhiÃ¢â‚¬â„¢s law minister does not mean that all powers have been devolved on him.

In fact, if a minister has to be involved in this sex and drug raid, then it could have only been the home minister. It is the job of a home minister, not his. The use of vile language by Somnath Bharti with police staff during the raid has not gone down too well with police authority as well.

A politician or any person in power cannot use power blindly in such an imprudent manner. The people in authority have to take many things into consideration before carrying out such activities because what may appear right for one might not appear so for another.
This post was published by Aditya Singhal, co-founder of askIITians.

Thanks for rating this! Now tell the world how you feel - Share this on Twitter and on Facebook.
(Nah, it's cool; just take me back.)
MOODTHINGY
How does this post make you feel?
« When Life Becomes Hell, Make A Heaven For Yourself!
An IITianÃ¢â‚¬â„¢s Slumdog Millionaire Moment »