With the National Testing Agency taking over the task of conducting the Joint Entrance Exam(JEE) from CBSE, there are set to be major changes in the national level examination for admission to the prestigious NITs and IIITs, and other Centrally Funded Technical Institutions. The most noteworthy of these changes being that the candidates can attempt the exam twice in the same year, once in January and once in April. Furthermore, the paper this time is being conducted only in the online mode and the best score of the two attempts of the candidate will be considered for the admission process. There are no changes in the pattern of the examination. 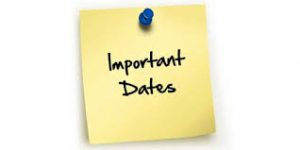 Â The registration process will begin in September 2018. JEE 2019 is set to be conducted in 8 sittings during both the attempts. The first attempt is scheduled to take place from January 6th to 20th , and again in April from 7th to 21st of April. Candidates have the option of choosing their slots. The govt. announced it will set up 3000 training centres to train the candidates to acquaint them with giving an online exam. The number of examination centers have been increased to 258, with 248 of them being in India and 10 abroad. A tentative calendar for the whole process is mentioned below :

So MARK THE DATES !!! Application Forms will be out soon .

Thanks for rating this! Now tell the world how you feel - Share this on Twitter and on Facebook.
(Nah, it's cool; just take me back.)
MOODTHINGY
How does this post make you feel?
jee, JEE 2019 DATES, JEE DATES, JEE EXAM DATES, JEE IMPORTANT DATES, JEE Main, JEE MAIN 2019, JEE MAINS 2019 DATES
« Major overhaul: Unique question paper for each JEE, NEET candidate from next year
Dates For JEE MAIN, NEET(UG) and UGC(NET) announced »