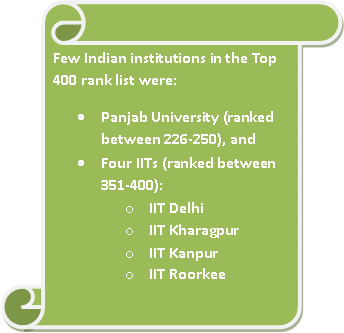 Just a decade old, the concept of World University Rankings has raised to the status of a well-accepted yardstick which measures quality of higher education institutions across the world. Shanghai Jio Tong University of China was the first one to launch its Ã¢â‚¬ËœAcademic Ranking of World UniversitiesÃ¢â‚¬â„¢ in 2003. Other international rankings that have found favor with academic experts are published by Times Higher Education (THE) and Quacquarelli Symonds (QS) every year.

India, with its over 700 universities and more than 35,000 colleges, failed to make it to the list of Top 200 institutions of the world in THE 2013 rankings. This drew flak from many quarters.

Many newspapers covered stories of how the best-known IITs failed to make the cut and absence of Indian institutes in Top 100 or even Top 200 lists of best institutions across the world. Our PM and President seem concerned about it. They have urged the Indian universities to improve their quality on various occasions. On the other hand, many academic leaders from IITs and IIMs have opined that the methodology of these global rankings is not relevant for Indian institutions. They have also claimed that institutions Ã¢â‚¬ËœbuyÃ¢â‚¬â„¢ their positions on these rankings list and the ranking process is not as fair as it claims to be.

Why should we try to improve our Global Rankings?

According to the National Assessment and Accreditation Council (NAAC): 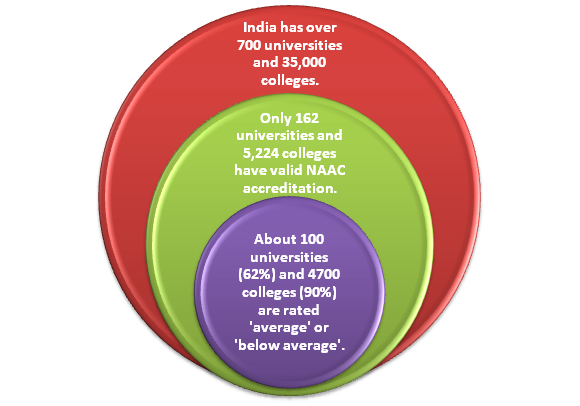 Since the government has now made it mandatory for all colleges and universities to have validNAAC accreditation, we will find the statistics look much worse in the times to come.

Last month, there were announcements that all the 16 IITs might pool in their resources to push up their rankings as Ã¢â‚¬ËœoneÃ¢â‚¬â„¢ entity. Phil Baty, Editor of Times Higher Education Rankings, disagree with such an idea. He says, Ã¢â‚¬Å“Presenting the data differently will hit the spirit of such global rankings. It is not a game. The aim should be to help Indian higher education sector overcome its challenges.Ã¢â‚¬Â

Academic experts say that presenting IIT as a single entity with different campuses may increase the number of research output and citations which is a vital parameter in most popular university rankings worldwide. However, it will not help if these numbers are scaled to size.

In a 2009 study, it was said that for in IITs, each faculty member publishes one research paper every year.

His or her counterpart at the Massachusetts Institute of Technology (MIT) comes up with six research papers in the same time.

If we think of IIT as Ã¢â‚¬ËœoneÃ¢â‚¬â„¢, research papers published by a faculty on an average will be less than the average number of research papers by an IIT Delhi or IIT Kharagpur faculty member. In such a situation, IIT rankings may slide down further.

Better performing IITs, such as IIT Delhi or IIT Mumbai will lose their identities and a chance to make it to the top of these rankings on their own.

What do you think Indian universities, especially the IITs, should do to improve their rankings? Do post your comments below:
This post was published by Nishant Sinha, co-founder of askIITians.

Thanks for rating this! Now tell the world how you feel - Share this on Twitter and on Facebook.
(Nah, it's cool; just take me back.)
MOODTHINGY
How does this post make you feel?
« Indian-American Student Develops Print-Out a Loudspeaker Technology
IIT Bombay to Get a New Entrepreneurship Centre for Emerging Technologies »