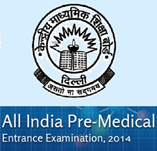 Conducted by the Central Board of Secondary Education (CBSE), Delhi, AIPMT has been in â€˜improvisation modeâ€™ since 2010. Last year, CBSE conducted NEET-UG as a common entrance exam to screen medical aspirants, which was much on the pattern of JEE conducted to screen engineering aspirants. However, due to the orders of the Supreme Court, NEET-UG has been suspended. Hence, CBSE will conduct the medical entrance test it used earlier – AIPMT.

AIPMT 2014 will have four sections: Physics, Chemistry Botany and Zoology. Each section will have 45 objective-type questions. In all, there will be 180 in the exam. The total duration of the exam will be three hours.

According to some sources, application form for the exam might be available on the official from the first week of December, 2013

Candidates from Andhra Pradesh and Jammu & Kashmir are not eligible to appear for AIPMT 2014. For rest of the candidates, AIPMT has imposed an age limit. Only candidates who are at least 17 years old and not more than 25 years old on December 31, 2014 will be eligible to sit for the exam. There is a relaxation of five years for SC, ST and OBC students in the upper age limit. Hence, they are eligible to appear for the exam till they are 30 years of age on December 31.

Like all contemporary examinations, AIPMT 2014 will also have an online application form system. The official website will allow payments through Credit Card, Debit Card or through Demand Draft.

Candidates must write down the registration number they get once they fill up the application form and save at least four copies of the Confirmation Page and the Address Slip after they pay fees.

Central Board of Secondary Education

Thanks for rating this! Now tell the world how you feel - Share this on Twitter and on Facebook.
(Nah, it's cool; just take me back.)
MOODTHINGY
How does this post make you feel?
« Figure out your JEE rank and the course options in IIT Guwahati!
Mars Orbiter Mission: ISROâ€™s long jump in Space »